Even before he was born, Aura had an eventful life. His green egg was laid in the straw of a stable by a wandering hen, taken home to be eaten and then left in a fridge for 3 weeks. After a car journey of 700km it was left in the pantry here. It was only when the Bantam Cochin hen Lady Jane became broody that we put it with her other eggs. Surprise, surprise, on a chick broke out of this egg.

Aura was a bit of the odd-one-out as he grew up in a big family. Even though he is now surrounded by bigger chickens he is still fond of Cochins and occasionally he can’t help grabbing a couple of cochin hens. Aura is half Araucana. 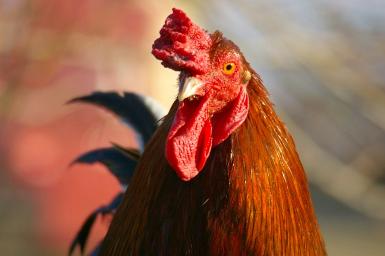 New video of Aura. Today he has reached the age of 10 years and 8 months
Nederlands / Français
Bertie and his sister Sheeba hatched under the warm feathers of their mother Ginger. He was always a cheerful little bird until he got very sick. He caught coccidiosis, a parasite that can severely damage the intestines. Together with his sister he was given some medicine and put in a separate run. But he didn’t get any better. And being stuck in that run was making him unhappy, so we let them free in the garden. Much to our surprise, while we had had difficulty getting him to eat, he started to pick at Marigolds (Calendula officinalis). Bertie knew instinctively what was good for him. Marigold has been used in the past to treat stomach ulcers and inflammations. Slowly but surely he got better.

Because of his illness he had a lot of catching up to do with the hens. That’s why we nicknamed him Flirty Bertie.

In the Winter of 2008/9 he injured his foot and so lost some of his resistance.  He became ill again and this time it was more serious. He got Marek’s disease. He left us on

Bertie is a bantam . 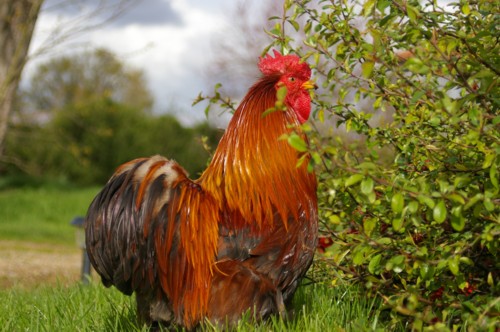 We bought Frizzy and his sister Lizzy  at a country fair. He was one of our first chickens. His curly feathers make him special. Frizzling is a genetic mutation in the chicken in which the feathers grow so that they curve outward, instead of lying smoothly along the bird's body.

Frizzles were first bred in Southern Asia, the Philippines and Java approximately threehundred years ago. Given their frizzled wings and neck hackles, they were extremely popular in exhibitions. However, the breed was nearly extinct until a breeding program was started up by enthusiasts. Frizzling can been seen in many breeds for example in Poland’s, Japanese and more recently Cochins.

Frizzy has always been a  happy chap. He left us at the age of 6. Not bad for a litle cockerel. Frizzy is a frizzle bantam . 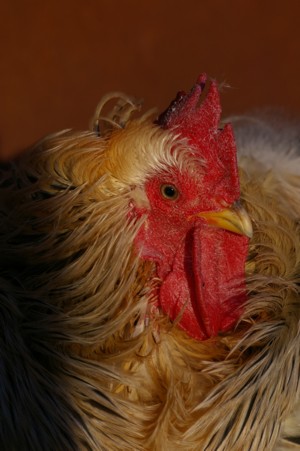