Silkies, and the Pompom-girls are no exception, are champion brooders and are also wonderful mothers for their chicks. But if you do not want chicks and you do not want them to be broody, you can discourage them. In the beginning, we had to do that quite often. They can become weak because they do not eat enough and, because they sit there so quietly, you can not directly see if they are suffering from parasites.

With certain varieties, such as Cochin bantams and Silkies it is not easy to discourage them. So now, mostly we let them sit. Every now and then we take them off the nest, check them and check their crop to see whether they have eaten something and put them outside to scratch around. But soon afterwards they will be back on their nest. Taking the eggs away doesn’t help, because they are just as happy sitting on an empty nest. Sometimes I have the feeling that they just enjoy to have a break from the hustle and bustle of everyday life and the cockerels that are always hanging around them.

Bo has been born with a bald patch on her head. Whether that’s been caused by the membrane of the egg sticking to her head while she was still in the egg, we don’t know. What's unusual about her birth is that  her egg had been deserted by the hen and cold for 4 days, before she hatched under a lamp. But she seems perfectly healthy and scratches around the chicken house with her companion Belle. One day Belle was broody. Bo wasn’t happy at all. She missed her. Fortunately Belle isn’t very fanatical with her broodiness. After a couple of days she left her nest and joined Bo again during their daily search for worms and insects in the wood.

Bo is a Cochin bantam. 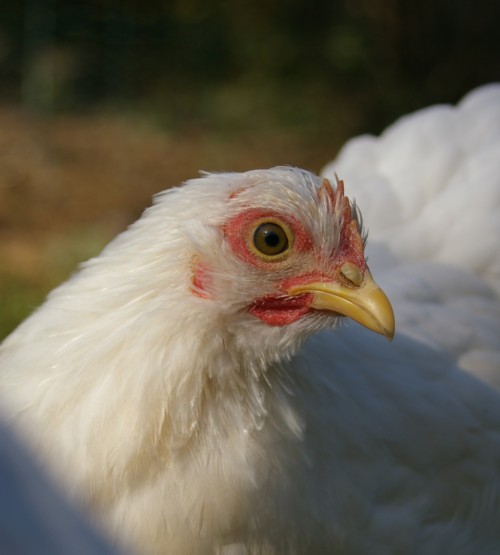 The consequence of hatching eggs is that you might end up with a lot of cockerels. We don’t eat chicken, so to find some more companions for our cockerels we had to buy new hens. The Coucous are two of those hens.

We bought them from a very kind lady in Fontenay Lecomte who loves chickens as much as we do. But as we were only looking for hens our choice was restricted. We came home with two Coucou de Rennes.

The Coucou de Rennes is originally a Breton chicken and until the Second World War was regularly seen especially in Rennes, but also in the rest of Britanny. After the war the Coucou de Rennes was replaced by more productive foreign breeds such as the Wyandotte, the Sussex and the Plymouth. The Coucou de Rennes woud have become extinct if  in 1988 the Ecomuzeum of Rennes had not found a couple of these chickens in an old farm owned by a retired farmer who had to let his property go for the building of a new residential area, Maurepas in Rennes. With these and some others the breed has,  since then, steadily increased in number.

It is a strong and quiet breed that not only lays well,  but also is a good breeder. The only disadvantage of the Coucou the Rennes is that they need a lot of space. That isn’t a problem in our farm as after their siesta they disappear in the field for the rest of the day until dusk when they return to their sleeping quarters, while scratching for their last insects. 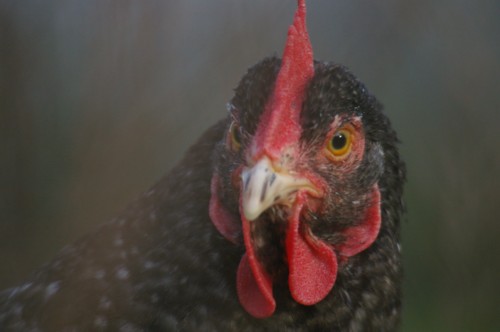