What’s nice about Silkies is that they are affectionate and can become very tame animals. They have a dark blue,sometimes even black, skin and their feathers are soft and silky. Not like the feathers of an  ordinary chicken. Their fluffy feathers make them look like a cat or an angora rabbit. The story goes that Dutch breeders used to sell their Silkies with the tale that these animals descended from a chicken crossed with a rabbit.

Another striking characteristic is the turquoise, almost rainbow like earlobe and their large dark eyes. On their legs they have five toes  with feathers. I find that Fluffy is a splendid example of a Silky. And they are certainly not fragile and vain . Even a decent downpour doesn’t stop them from going out to have a good scratch around for food. 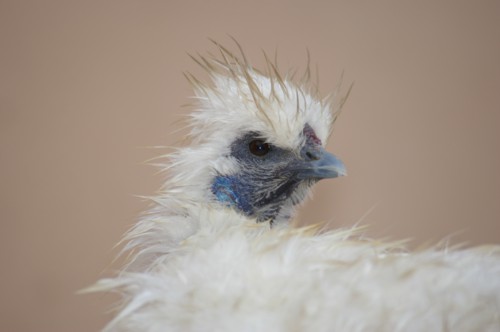 I have already mentioned the offspring of Chucky, the meat cockerel and Lizzy the bantam Cochin. Cindy is one of them. I named Cindy after Cinderella. She’s not totally white and almost always dirty. Apart from that she is a strong chicken with bossy boots. Whoever gets in her way, gets a peck with her beak, except her own mum Lizzy of course. 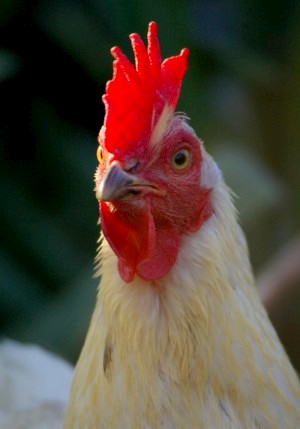 You met Little Hannah earlier when I told you about Stevie. She’s a beauty. For that reason I have given her the nickname Miss Vendée

.  She came here with her friend Heidie, who’s photo is on the next page.

Little Hannah is a Hamburgh. You would think she originally comes from Germany, but actually this breed  comes from the Netherlands.

The Hamburgh is a very old breed. They already existed in the Netherlands in the 16th century. They are elegant, lively, strong and excellent layers, even in winter time. They are also very good flyers even over longer  distances. Fortunately Little Hannah stays here close to her Stevie. 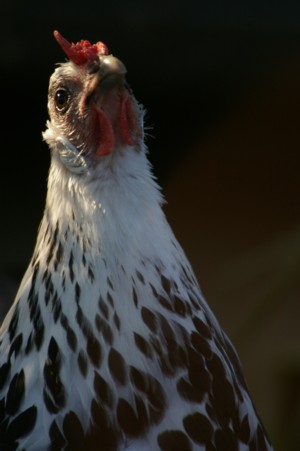 Ginger became ill in May 2009. At a certain point she was so sick, that I called the vet to put her to sleep. But when the vet's assistant answered the phone I suddenly had huge doubts. She asked me if Ginger was still eating. Which she was still doing. The assistant suggested postponing it for a few days to see what happened. With a lot of extra feeding, occasionally a Reikie treatment and much love, she made a full recovery. I cared a lot about her and she sensed it.

A few months later she started to lay eggs again. But it didn't last long. She became broody, weakened and again began to sneeze more. I didn't have tests carried out, but I think it was a Mycoplasma infection, which is know to return when resistance is low.

As she didn't always get enough to eat, I would give her some extra in the evening. And then she would quietly come  with me to her spot beside my bed. I did this  because, that way I could take her to the vet immediately, when she would get short of breath at night.

She seemed fairly stable the last couple of weeks. She even ate more in the evenings and she still ambled around nicely with her cockerel albeit somewhat slower than before.

We had planned  to go away for a week. I entrusted Ginger to a very good housesitter. We had only been away  one night when the housesitter texted me to say that Ginger had passed away that morning.

You might not believe it, but I have the strong feeling that she died from loneliness. She missed me. From her special place by my bed, she often snuggled up very close to it.

That morning, the housesitter first went out to let the other chickens out of their run. When she came back to put Ginger out with her group, she was in a corner of her cage and she had quietly passed away. The day before the weather had been beautiful and she had spent the whole day outside scratching around. But now all her good spirits were gone.

I had not expected this. It is possible that Ginger had remained alive for me and once I was gone, she had given in to her weakness. We will never know for sure. One thing is certain. Ginger had a beautiful life and had been surrounded with much love.

No matter what most people think about chickens, in fact, they are not only sweet but also very affectionate and will really bond with their boss. Of that I am now convinced. 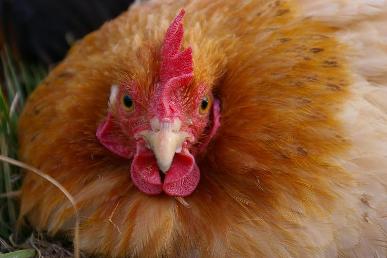