Apart from saying that Sheeba is a strong and happy chicken I would like the pictures to speak for her. May I present to you:  A portrait of a Lady. 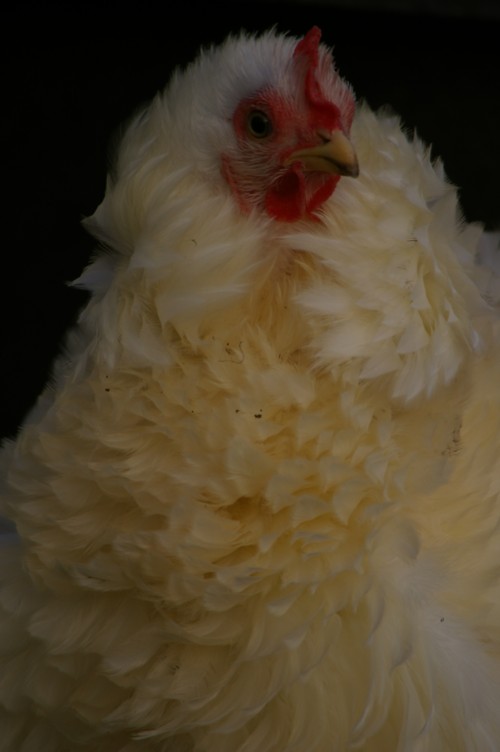 Our first year here in France, we weren’t familiar with all the ins and outs of French life. As we had enjoyed our first 4 chickens so much, we decided to buy a couple more. A friend told us where to find the monthly local poultry market.

On a large square the chickens were displayed in cages on tables in the scorching sun. These were clearly chickens for egg-production and consumption. Here in France that is the main reason for keeping poultry in their so-called ‘basse-cour’. Having ornamental poultry is an exception.

On the sign was written what they were: Marans, although we now know that these are not pure breed Maran. However, we bought some anyway. The two Twinnies (Marans) and a hybrid Rusty.

Of the 5 chickens that we brought home from this market only Twinny survived. The others died from a range of different problems and diseases. Also Twinny has her off-days. But at the moment she is in full spirit and surprises us every other day with a chocolate brown egg.

Not for nothing  is the Maran known as the French chicken with golden eggs. The Maran is one of the youngest French breeds and a cross of amongst others the  Faverolles and the Croad Langshans. It  owes its name to the now touristy fishermen’s village Marans, in the Charente Maritime.

It is perhaps unnecessary to say that we no longer buy from that market, if only for the poor conditions in which they display their chickens. 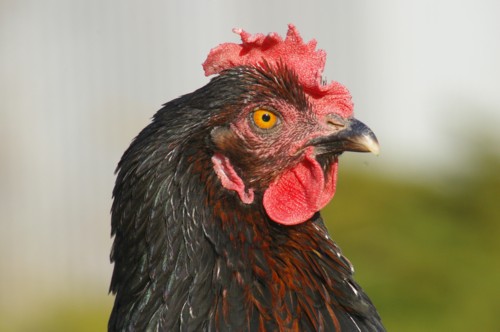 Wendy was missing. I couldn’t find her anywhere. I had been looking for her the whole afternoon. At the end of the day we even asked the children to join our treasure hunt.

As the chickens roam around freely on our 4 hectare farm she could be anywhere. In the barn? She wasn't there. Under the firewood? No sign of Wendy. Eventually I took the secateurs to look under the bushes because the brambles and the nettles were as high as our shoulders.

When the sun was gone we had to stop our search. Something I don’t do very easily because of the predators around the house. But there was nothing to be done. It was dark.  Fortunately Wendy could fly in case she got into danger.

Before sunrise I was already out and about looking for Wendy again. All of a sudden I heard a noise in the nettles. And there she was. On a nest with no less than 21 eggs. And they weren’t all hers. Her female friends had given her a hand. 21 chicks would have been a  bit much for us, so with a lot of protest we managed to take the eggs away from her. And since then, if I notice in time that she is broody again, I put a poultry saddle on her back, that contains a key finder. This way I can beep her whenever I want to.

Wendy is not a pure Araucana, but she’s a cute one. 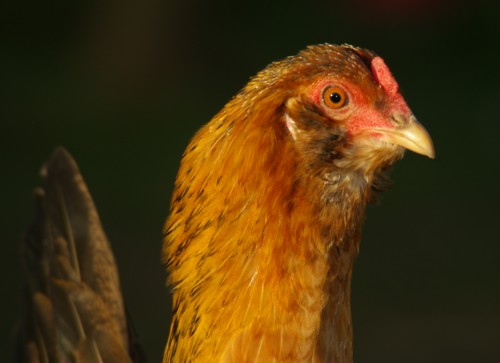 The picture you see here was taken on , a few hours before Becky was put to sleep. I had to make a very difficult decision then.

Becky is a daughter of our first cockerel, the industrial chicken Chucky. She and her sister had, from a relatively young age been mixing with the others, when, we assume, Chucky mounted her. I can not remember too well but I know that from that moment she had difficulty walking. We have been to different vets several times. Finally we discovered that her knee was dislocated, but by then it was too late to do anything.

Her right leg stuck out a bit to the front. In spite of this, Becky was fine. But as she started to have difficulty scratching the ground, I used to feed her a bit extra every day. That was my so-called Becky hour. The family soon knew that I was to be found with the chickens then.

Mostly she just sat on my lap while I held the food and water bowls in front of her. She seemed very happy while I opened sunflower seeds and she eagerly pecked  them from my hands. And, if anyone dared to try to steal her food away from her they would get a peck. I will never forget the hours that I spent with her.

But at a certain stage arthritis began to play a role. Then an infection in her foot, which ultimately was responsible for my decision to put her to sleep. I wanted to save Becky from worse suffering. But she was still full of life. I wish that I could have given her one last fine summer! 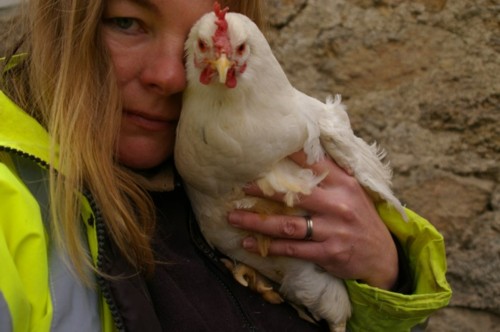 This was my last tale. There are many more stories to tell. As well as the chickens playing a leading role in this exhibition, we own and have owned since then many more chickens. Every chicken or cockerel has its own beauty and its own character and that’s what I wanted to emphasize with this exhibition.

I would like to end by saying that keeping chickens is a fascinating hobby, although I wouldn’t recommend it to everybody. Chickens need quite a lot of space and good husbandry.  A clean house and well-balanced diet is very important.

Here in France they’re considered as exotic animals. They can get many different illnesses. To discover what’s wrong with your sick chicken is not easy. You need a good vet, specialised in birds and these are not easy to find.

The next page shows some more photos of chickens of our friends.